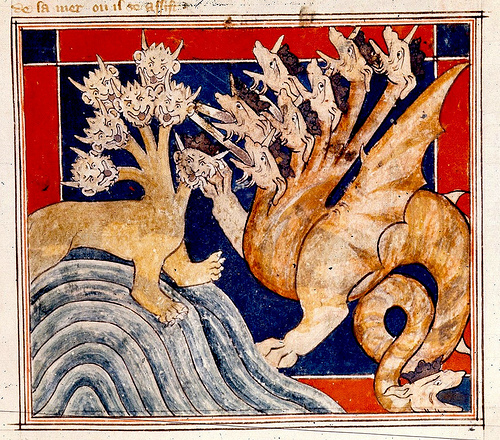 This is a Cosmic Christmas.

And a great sign appeared in heaven: a woman clothed with the sun, with the moon under her feet, and on her head a crown of twelve stars. 2 She was pregnant and was crying out in birth pains and the agony of giving birth. 3 And another sign appeared in heaven: behold, a great red dragon, with seven heads and ten horns, and on his heads seven diadems. 4 His tail swept down a third of the stars of heaven and cast them to the earth. And the dragon stood before the woman who was about to give birth, so that when she bore her child he might devour it. 5 She gave birth to a male child, one who is to rule all the nations with a rod of iron, but her child was caught up to God and to his throne…       Revelation 12:1-5 ESV

The Woman clothed in the sun with the moon at her feet and the 12 stars represents the people of Israel.  Do you remember Abraham’s call, that he would be a blessing to the nations? (Genesis 12)  That his descendants would be numbered with the stars? (Genesis 15) Well here we see that out of this nation a special child is born.  Of course Mary is the individual who gave birth, but Jesus is the child of the nation of Israel.  Through him the nations of the earth have received a blessing.

But there is a dragon!  Who lets a dragon in where a baby is being born?  But this reminds us that Jesus came to defeat the Liar, the Deceiver.  It was the serpent who deceived the man and his wife in Paradise. And this child is the one who will crush the head of the serpent.

John shows him as a great red dragon.  The dragon does what he can to get rid of Jesus.  Herod is moved to do him in. but they escape to Egypt. Then it is another Herod and Pilate who will have Jesus put to death. But their victory is their defeat. It is by his death that we receive salvation. In seeming defeat, the great victory is won.

Advent is more than a quietly sleeping child in a Manger.  (How did he sleep thorugh the Angel’s loudness?)  It is the birth of a king, it is the seed of God’s ultimate victory in the world.

All the dragons are slain by that child.

In our Christmas Eve service, we read Genesis 22…

Why should we read this story at Christmas?  Genesis 22 is maybe the most provoking passage in the Bible.  We wonder why God would challenge Abraham with this.

My answer is that it resonates with the Christmas story.  If you play a note on a piano that same string on a violin or a guitar, if they are tuned the same, will resonate.  The likeness will cause a vibration.  Consider a few facts:

Isaac was a long promised child.  We know that the Messiah was promised from the time of the Garden of Eden, later in the promise of a greater Moses, and then through he prophets in a variety of ways.

Isaac was a miracle child.  Sarah had Isaac at 90 years of age. It was so unlikely that she laughed with the Angel told Abraham that she would have a child.  It was so fantastic that his name “Isaac” means laughter.  Jesus was born as a miracle – no human father and yet Mary gave birth.

Isaac was a beloved child.  God said, “Take your son, your only son, whom you love – Isaac and go to the region of Moriah…”  When we speak of Jesus as the Son of God, we capitalize it since he is the only one.  God took his son, his only son, whom he loves – Jesus, and sent him into our world.

Isaac was obedient to his father – as was Jesus who submitted to the will of the Father when he became a sacrifice for sin.

There was a substitute – Isaac was spared and a ram found nearby was his substitute.  Jesus was not spared, but he became our substitute.

The sacrifice was on a hill.  In fact there is good reason to believe that this hill was in the same area and perhaps the same hill where Mt Zion sits.

Are all these just by coincidence?  No.  Did we pull them out of the text when they are not really there? No, they are there.

Genesis 22 points us to John 3:16.  For God so loved the world that he sent his only begotten son, that whoever believes in him should not perish but have everlasting life.

God the father did what Abraham did not have to do.  If we want to imagine the gift of God, consider how hard it must have been for Abraham – and multiply it many times.   Abraham had waited a matter of years to have a son, but God and the Eternal Son had forever.

Jesus the Son came willingly.  Isaac was willing to obey his father, but he did not know what his Father was planning to do.  Jesus knew his destiny before his birth.  He fully and willingly obeyed the Father.

What string does this cause to resonate in you?  We all desire to know Love. Can you begin to feel the love of God?  Can you feel in your heart the incredible depth of his love?  With long planning and total sacrifice, he sent his son to the world to rescue all who will believe.