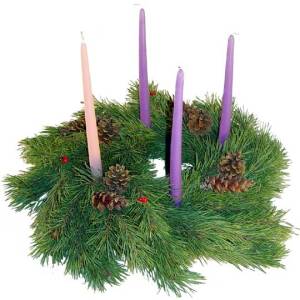 For to us a child is born,
to us a son is given,
and the government will be on his shoulders.
And he will be called
Wonderful Counselor, Mighty God,
Everlasting Father, Prince of Peace. (Is. 9:6)

This phrase in the Hebrew has the idea of a warrior.  The “Mighty Men of David” were those who rallied to his cause and were battle tested.  And so the babe of Bethlehem grew up to do battle.  How are his enemies?

Here are the results of a discussion on our Adult Class:

The three enemies of humanity are Sin, Death and the Devil. IN class we assigned scriptures to enemies. Note that some verses speak to all three enemies.

Matthew 11-13 chronicles the rising opposition to Jesus.  Again remember that Matthew gathers material thematically.  So it is interesting that in the midst of this we have this sequence in Matthew 11

So we have a sort of Calvinist proof text in the verses on God hiding and revealing things – the wise (in their own eyes) can not see what is there because God hides it from them, and yet the childlike (willing to be taught? dependent?) have these things revealed.

This is followed by an open invitation to “all” who are weary and heavy laden, who are invited to “come” and “take my yoke”.  As is often the case the scriptures juxtapose Calvinist and Arminian verses right next to each other.  And most will chose the one they like and explain away or diminish the one they don’t.  Whereas the scriptures are happy to leave them side by side, seeing not a contradiction but some kind of harmony.

What is also of interest, is that the open invitation is “to all who are weary and burdened”.  This does not limit the invitation from Jesus’ enemies.

I have often wondered at the expression in Psalm 23 “You have prepared a table for me in the presence of my enemies.”  Why are there enemies present?  Is the psalmist gloating?  Is the table and the cup that overflows some kind of invitation?  Some of the language of Psalm 23 suggests the desert wanderings of Israel after the Exodus.

In Matthew, one of the most open and inviting passages is placed right in the center of the time where Jesus is being opposed and eventually rejected.  In the middle of this life and death conflict, the invitation remained open “to all who are weary and heavy laden.”  Opposition to Jesus leads to something that is worse than Sodom at the last judgment.  Yet acceptance of Jesus yields a well fit yoke that is not burdensome, but rather a yoke that gives rest.

Notice that Psalm 57 is about David hiding from Saul in one cave (I Sam 22) or another (I Sam 24).  He is being hunted by his enemy, and is hidden away from sight.  The words chosen to start Ps 108 affirm the greatness and steadfastness of God.  One wonders at a man who sees stars from inside a cave!

Psalm 60 is about trouble during a military campaign.  David was a man of war.  The geography describes encircles Judea.  Here David affirms that for all his arms, God is his strength.

What then is the purpose for Ps 108?  We notice that the anxieties of the previous psalms are not included, but only the affirmations.  Is this Psalm then to be used in times of extreme danger?  Perhaps including personal peril (Ps 57) and national peril (Ps 60).  Or is it that two affirmations are better than one?

One is struck from the New Testament point of view, as to how David could affirm God in such beautiful language (v. 1-5) but that is set against language of war and conquest.

“Give us aid against our enemy,

for the help of man is worthless.”