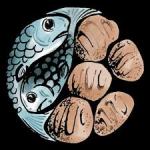 The Feeding of the 5,000 is found in all four Gospels.  It is the only miracle story found in all of the Gospels.

In John it becomes a text on Jesus’ leadership – the people want a king. In the Synoptics it is framed a bit differently.

“…there is more to this meal than physical sustenance; sitting together is a symbol of unity.  Instead of being dismissed an dispersed {as the disciples suggested} the crowds are welcomed into a new community.  See on v. 19 for Jesus’ role  as the head of the family.” {when he offers thanks and breaks the bread.}

This story is important, not because Jesus promises to give you as an individual what you want.  It is important because it shows us the kind of leader Jesus is.  He lives to create a new community.  If you think the work of God is done when you get a ticket to heaven, you have, pardon the pun, missed the boat.

I have been preaching and teaching on Matthew’s account of the life of Jesus.  It is clear that the New Testament holds that Jesus did many miracles.

Matthew 9:35ff has a summary of Jesus life – miracles were an integral part. It is hard to separate the teacher from the miracle worker in the Gospel accounts:

35 Jesus went through all the towns and villages, teaching in their synagogues, proclaiming the good news of the kingdom and healing every disease and sickness. 36 When he saw the crowds, he had compassion on them, because they were harassed and helpless, like sheep without a shepherd. 37 Then he said to his disciples, “The harvest is plentiful but the workers are few. 38 Ask the Lord of the harvest, therefore, to send out workers into his harvest field.”

In fact, without the miracle of Jesus being raised from the dead, there would be no Christian message.

Now, brothers and sisters, I want to remind you of the gospel I preached to you, which you received and on which you have taken your stand. 2 By this gospel you are saved, if you hold firmly to the word I preached to you. Otherwise, you have believed in vain.

For 250 years people have quoted a Scottish philosopher David Hume who said that is not reasonable to believe that something contrary to the very regular rules of nature could ever happen.  This was even the substance of a lecture by a philosopher at the University of Wisconsin.  He said it is just as logical to believe in space aliens.

Why should we believe that Jesus was raised?

We have written accounts of eyewitnesses who claimed to have seen Jesus alive after his crucifixion – and this was in fact the central message of the first believers:

Jesus of Nazareth was a man accredited by God to you by miracles, wonders and signs, which God did among you through him, as you yourselves know. 23 This man was handed over to you by God’s deliberate plan and foreknowledge; and you, with the help of wicked men, put him to death by nailing him to the cross. 24 But God raised him from the dead, freeing him from the agony of death, because it was impossible for death to keep its hold on him.  (Acts 2:22-24)

We have the additional evidence that the resurrection of Jesus was predicted before it happened, by hundreds of years.  We have the evidence and testimony of the church through the ages of the power of the Gospel. We have the attraction of Jesus himself across time and geography.

One final piece of evidence is “fit”.  How well does your theory of life fit all of the evidence:

The Romans were outsiders.  They worshiped other gods – such as Jupiter and  Mercury.  The Romans were also conquerors.  Israel did not have its freedom. Instead the armies of Rome held them as captives.  Citizens of Israel did not have a say in their government.  They were told what to do. They were told what taxes to pay. This was enforced by soldiers.

Another time, when Jesus went to the town of Capernaum he met another outsider.  This man was a Roman soldier.  He was a man in charge of a group of about 100 soldiers.  This centurion was an outsider.  Normally, a Jewish man would have nothing to do with a Roman Soldier.

Jesus was approached by such a man. He said, “My servant is sick and suffering.”

Jesus said, “Shall I come and heal him?”

Do you remember what Jesus taught us about our enemies?  In Matthew 5:43 he taught:

“You have heard that it was said, ‘Love your neighbor and hate your enemy’.  But I say to you, love your enemies and pray for those who persecute you so that you might be called Children of your Father in heaven…”

Then a second thing happened.  The Roman soldier said that Jesus did not need to come.  He took a lesson from his own life and applied it to Jesus.  He said that as a soldier he understood authority.  When he commanded something to be done, it was done.  If I say ‘do this’ it will be done.  So if Jesus simply commanded it, his servant would be healed.

This was amazing even to Jesus. He said that he never saw faith like that among his own people. His people had the bible and the history of God’s mighty acts. They knew about Abraham, Moses and David. They knew about the Exodus from Egypt. They knew about the power of Elijah to bring fire from heaven.  But they did not believe the way this Roman soldier believed.

Sometimes outsiders do the Lord’s work.  He took the persecutor of the church, Saul, and made him the planter of churches, and changed his name to Paul.  He used Jethro to give some leadership advice to Moses.  He used Cyrus to restore Israel to its land.

Jesus said, to the man, “Go, let it be done just as you believed it would” and at that moment the servant was healed.

The Outsider was right.  I sometimes see people think that they need to use special words or rituals to have power in prayer. I have seen people say that you have to express a lot of emotions and you have to shout.  Jesus simply commanded, and it was done.

One time a woman in New York told me that she lost her keys in her house.  She wanted me to go into each room in the house and pray that God would find them.  I said to her that I was glad to pray. But we could stay where we were, and pray for god to help her find what was lost.  God did not need us to walk into every room. God already know where the keys were.  She called me the next day and said, “Praise the Lord! I found my keys.”

I have come to like Craig Blomberg’s work in Matthew, I have his commentary  in which he does a very good job of laying out the shape of Matthew.  (The New American Commentary, Vol. 22, Matthew; Craig L Blomberg, B&H, Nashville, 1992).

I have posted on this  several times, check the “Matthew’s Gospel” link in the topic cloud to the right.

Matthew 5-7 gives Jesus’ authoritative teaching on what it means to be a disciple.  This is the Sermon on the Mount.  There follows two chapters that have 10 miracles in 9 miracle stories, but there are a couple of themes weaving in and out: Miracles, Following Jesus, Opposition.

Blomberg divides the text into 3 sets of 3 miracle stories (underlined).  The narrative pieces then seem to fit into this pattern.

I am teaching a class on Miracles at a local college and in my adult class.

As I was preparing this talk, there was a story of a man found after being lost at sea for 13 months in a small fishing boat.  Is this even possible?  How could one survive that long without fresh water and food?  It occurred to me that you can choose to decide before you consider the evidence or after.  So I found some discussions of the possibility of living all that time on a boat.  see

I remembered in Spanish class reading a book by Gabriel Garcia Marquez about a man lost at sea for a shorter time and how he survived – “Relato de un Naufrago” or “Story of a Shipwrecked Sailor.”

One has to examine the historical evidence in a case like this – interview witnesses, check his story where it is verifiable, check if eating turtles could sustain a person for that long, ask how he traveled from point A to point B if his story is false.  In short, check the evidence.  Instead of deciding on pre set opinions, consider the evidence.

When it comes to miracles, it has been common since the Enlightenment to discount their reality.  David Hume said that no reasonable man can believe such an exception to the universal experience of the human race.  Anthony Flew said that the talk of miracles in inherently nonsensical.  Thomas Jefferson, a good Enlightenment Deist, actually took his scissors to the New Testament and kept what he felt was the good teaching and eliminated such matters as the Virgin Birth and the Resurrection.  His version can be found here

Thomas Jefferson did not and could not go back and see if such things happened. He decided that they could not have happened.  So he, like many, tried to recreate the historical Jesus according to his edited edition of the Gospels.

The New Testament as we have it claims that these events we call miracles happened and that they were attested by a great number of eyewitnesses. So one has to consider the credibility of these witnesses.

Just as you can not recreate the unlikely events of Napoleon’s life, or see if in fact 300 men held off the armies of Persia, so you cannot recreate Jesus’ miracles. But you can evaluate the historical record.