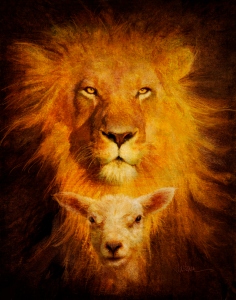 There is a TV show called Madame Secretary. It is about a fictitious Secretary of State.  In one of the story lines there is a dangerous religious cult.  This cult believes that it is their calling to bring about the events of the book of Revelation.  They turn out to be terrorists in their own right.

Such groups exist. But they are wrong.  No one can bring about the events of the end but the Lion, who is also the Lamb.  He alone can open the scroll of God’s decree.

Up to the time of Christ, people were looking for a Lion. They wanted a great military leader. They wanted their own Alexander the Great, or their own Caesar to lead in conquest.

When Jesus came, he rode into the city on a donkey, not a war horse.  He was a teacher, not a terrorist.  He started with only 12 men – who had to follow him as a homeless preacher of righteousness.  He came to Jerusalem, not to reign, but to purify the house of worship from money making.

He was not a Lion as the people had hoped for. He was the Lamb, as John had called him.   Like a lamb, he accepted his arrest, his false trials, and his death at the hand  of the Roman governor.  Like a lamb he was a substitute, he gave his life to save his people from wrath.

All of that history of the Gospel is summarized when the Lion of Judah is revealed as the Lamb of God.

He went to the Almighty and took the scroll from his hand.  He alone is worthy.

What we see here is that the path for God’s will to come to the earth, the path to victory is not a military path.

In history the Roman General Constantine had a vision where a cross appeared in the sky, He took that as a sign to become a Christian. He baptized his army by marching them through a river.  That made them Christians (in name only). Later when he became emperor, he made Christianity a legal and even a favored religion.  Now the kingdom of God was tied to the power of Rome.

Through history the Gospel has been entangles with various political causes or parties or leaders. It always ends up as a disappointment.  Why, because we can only be lead by the Lamb of God.  The Lion of Judah is the Lamb who was slain.

Do not think that we can make our nation righteous by the use of Governmental power.  Government can do good and it can certainly do harm. But it is not capable of bringing about the kingdom of God. 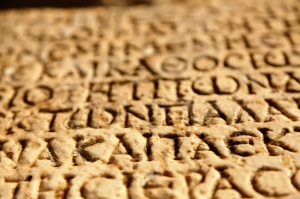 The word “evangelical” comes from the Greek word for Gospel or Good News.  It was lifted up as the descriptor of the Protestant Reformation – The Lutheran and Reformed churches were gospel centered.  The Gospel they were talking about was that religion and church politics had nothing to do with faith, but trust in Christ does.  Trends and culture can not determine the shape of the church or its message, the scriptures do.  Doing things does not make us right with God, believing the Gospel does.

The word Evangelical in mid 20th Century  America meant all of that, and it meant to distinguish itself from anti-intellectual fundamentalism and religious legalism.  It meant to affirm careful scholarship and intellectual rigor within the fence of faith.  It meant an open engagement with our culture. It meant to be aware of the world outside of our city, state and nation.

Since about 1980, the term Evangelical has become a descriptor of a voting block. some of this makes sense.  To be pro-life affirms that God is the author of life (See Genesis 1 and 2.)  But I would say that has implication for both abortion and healthcare, both end of life and middle of life.  We can hardly be pro-life and advocate random violence on our nations enemies.

But some of this does not make theological sense.  To be pro- or anti – gun control is not a thing found in the Bible – though indirectly we might talk about justice and freedom. Some issues can not be solved in a 140 character Tweet nor with a Facebook like button.

Some evangelical leaders promoted an agenda of Christianizing America through politics.  Now I agree with being informed citizens, active voters and advocates for truth and wisdom within our culture.  But I do not believe we can legislate people into Christendom.  It has been tried many times and failed. (Read up on Constantine, the Holy Roman Empire, the Crusades, the New England experiment, Prohibition, and the Moral Majority.)

This idea inevitably compromises the activist. In order to support a political coalition, we have to partner with and excuse partners that are personally unethical or who advocate things that disagree with our core document.  Hence the gospel is part of the hustle and wheeling and dealing of politics.  In this process it is debased.

We do need to speak truth to our culture.  Anti Slavery laws were motivated in great part by christian concerns for the dignity of human life.  The Civil Rights movement grew out and through churches in the 50’s and 60’s.  While abortion remains legal, the numbers of them has declined from the heyday of the 70s. It was said the life was a blob of flesh, but sonograms (science!) showed otherwise.

So as individuals and people dedicated to causes, let’s advocate and vote.  But as churches, denominations and ministers of the Gospel, let us not baptize the mixed sausage or truth, near truth, half lies and deal making that is the eternal recipe for politics.

Let “evangelical” cause people to think about Jesus, not Senator X, Governor Y or President Z. But let Evangelical Citizens A through Z vote, volunteer, give, advocate, serve, engage, disagree and be like Jesus doing it.

How should we be able to identify a Christian voter?

I want to suggest that there is a better mark.  A Christian citizen who votes and who cares for this country should be marked by a way of thinking, acting and speaking….